skip to main | skip to sidebar

Wedded bliss beats all other blisses.

Can I preface this post by saying that I love Madame2Bar more than anything else in this world?

With that out of the way, I note with interest, and in a completely non-judgemental way that:

As is my wont, I had more to say in my last post than what I posted. Most of the time I keep the goodness to myself (mmmmm, goodnesssss, nom nom nom). Sometimes I just plain forget.

Other times, much more rarely, I'm too drunk to get out of this chair so I'll just post some crap. Bless you Glen Parker, and your Single Malt slice of heaven!

Last budget season, my soundtrack was Lynard Skynards "Live, One more from the Road".

It's amazing how a handful of beer-soaked hicks can be so damn good at their stuff. This double album rocks like a cow in the wind. Each of these guys is/was an absolute genius. Drummer - Genius. 3 Guitar players - genii. Keyboards - Same. Bass Player - Not so much, but sometimes the genius of the bass is in not really noticing it.

This year, it's been Enoch Light and the Light Brigade's Provocative Percussion Vols 1 & 2. Background music. Elevator, Lounge, tiki, cool stuff. Light like a feather but heavier than a mountain. Yeah, you may mock it but pick up your instrument of choice and you do it. This is the kind of stuff that seems so easy and so nothing yet gets deeper the deeper you go. On a par with Lynard Skynard's musicianship but galaxies apart.

Is one a step forward from the other? I don't know.

For a period of time, I was a guitar head. And I was good. I played for hours every day, my entire record collection consisted of guitar music of the 70s and 80s ... hair metal, blues, jazz - six strings and rocking. I have dozens of albums that are all instrumental guitar (and Madame2Bar will NOT listen to them).

What's different though, is that, years ago, I couldn't have listened to both albums at the same time. Now, I can. This may not mean much to the casual observer, but it's a hell of an insight.

Arrgh. It's taken 20 minutes to write this, an hour to do the links (hey, I'm drunk and distracted), many minutes of spell checking and another hour to get this far without a finish.

Let's try another way. Some of the worst times in my life have been when I have forced myself to go in a certain direction. Looking back, the times in my life where I haven't moved have seemed benign at the time but have turned out to be some of the worst times as well. So, maybe, it's about making sure I'm moving, without forcing myself into a direction. Making sure I'm stepping, no worrying whether I'm stepping forwards or not. Does that make sense? It does to me. 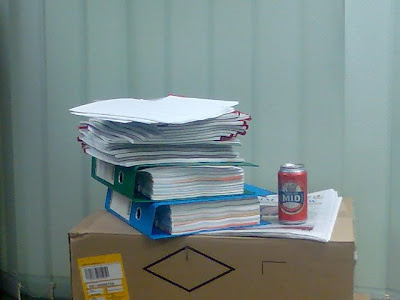 Not sure what makes my head spin more

In those two lever arch files are approximately 1,280 pages containing 16 columns of numbers (12 months, 4 totals, 1 description and 1 general ledger referance) and a minimum of 30 lines per page, meaning I've spent the last 2 1/2 months generating, checking , referencing and dissecting at least 614,400 unique numbers along with hundreds of emails & phone calls, 20 or so presentations, 2 return flights to Sydney and back and more late nights that I care (or can) remember. It all culminated in a formal presentation lasting a shade under 12 hours.

Budget time is probably the key time of the year for me, where I display all I've learned about in the last year about the 10+ businesses I'm responsible for, wrangle the knowledge and experience of at least a dozen (unco-operative) others, and cobble it all together into an 18 month prognostication upon which I will be judged at some point in the future. All while making sure my staff and department are hitting their targets.

So, as you can imagine, it is a big deal. And having depression means one is often less capable dealing with the big deals.

Being a year older and wiser (and greyer) I was able to observe myself riding the rise and fall of the depression tide. There were moments of panic and rage along with antipathy and madness, anger and humor. What was different this year, was not necessarily the emotions, but the recognition of them and the control (at the good times) and the lack of fear (at the bad times).

I learnt that all of the things that come out of me are me, not something that's happening to me or me reacting to something. I owned every one of those feelings, and if someone let me down, then I was happy to acknowledge the disdain and disappointment. I wasn't '2BarRiff - angry feeling like he was at getting out of control'. I was '2BarRiff - mad at the prick who didn't do what I was counting on them doing'.

And the best thing is that I think others in the office appreciate me for it, judging by the openness and respect I've been shown lately. The others know I have their back because they've seen me taking the bullets (METAPHOR ALERT! METAPHOR ALERT!), for the last year I've been more quiet about it.

As a manager, I've learnt more about dealing with people than ever before. It's one thing to depend on someone, it's another to really, really, really count on them - the instructions need to be precise, the stakes clearly spelt out and the abilities of the person judged against what the task is ... can they already do it, can they grow with this task, what if they cock it up, is it better or easier to stay up an hour later and do it myself?

But finally, the beer's been drunk, and the red wine, and the celebratory scotch. The reruns have been rerun, numbers recast, reconciliations posted. Tomorrow will be the finish and I have 2 weeks of holidays coming up.

Us, your humble authors

<- That button, right there

Both in our 30s struggling through things like marriage, parenting, budgets, single income, depression, home ownership and being too damn sexy for our own good.

The blog title comes from the joint realisation that our children will succeed in this world because they are cute, not smart.

And we're only half joking.