skip to main | skip to sidebar

I wonder sometimes why I even bother. My parents travelled around Europe about 8 years ago and stayed in YHA accommodation. They had a ball and said the places they stayed in were very clean and very nice. Friends of mine are in Europe as I type and they were astounded at the prices of B & B's as they were taking their three children. So big mouth me suggested the YHA's as an alternative. They booked.

Apparently the ones they've stayed at are CRAP and now I've got the blame for the suffering they are going through and ruining their holiday. But the email ends with 'Still love ya even if I am suffering because of you!'

Great. That tops off a crappy few months!
Posted by Madame2Bar at 5:17 pm 1 comment:

Looking at the world through shit-coloured glasses

I've only recently come to the conclusion that I am not as well as I had thought.

Initially, I had thought that it was just getting down because a few job applications did not work out but there seems to have been a theme going back to probably the start of the year.

Lately, it's manifesting itself in everything coming up crap. Sometimes in life, it takes no effort to see the good things in the world and enjoy them. For me, now, it seems like that will take more effort than I can give.

I'm viewing the lack of work as a reflection on myself, the concern at my situation from those close by as annoying and unwanted intrusions, and my future as decidedly bleak.

I've wanted to sell my guitars and forget about music, throw out my books and delete my mp3s. Quit running, drop out of basketball.

Cause it's just too hard AND because I just don't know if I'll ever have the ability to care in the same way as before.

And I swore in the post title. Madame2Bar is going to kill me.
Posted by 2BarRiff at 10:47 pm 1 comment: 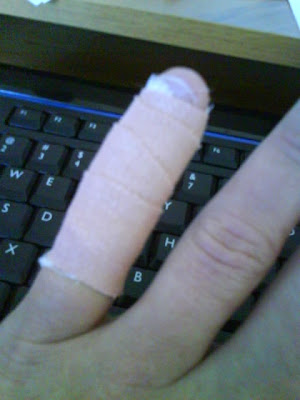 I woke up last night with all sorts of pain in my left little finger.

Seems I went a little too hard a basketball last night and either whacked someone or something. I never noticed it at the time, as I was hell-bent on my mission to get out of a 3 week scoring rut. Which succeeded, yo!

Hopefully my amateur patch-up job will see it right before finals.
Posted by 2BarRiff at 11:04 am No comments:

Since you're all hanging on an update:

1. I had my last schedule counseling session about a month ago. I was good.

2. Further counseling sessions are at my discretion. Which is nice cause the fees went up again.

3. I just realised that I've forgotten to take my anti-depression medication for about a week. The only effect that I've noticed is that I've started to go back into the pattern of not wanting to sleep. Other than than I have been very stable as far as moods go. That said, not having to work for 2 months has put me on a very mellow setting.
Posted by 2BarRiff at 12:26 am No comments:

So I decided not to take the lower paying job even though the industry is way more exciting than I've worked in, in the past.

It came down to the fact that the boss wanted to pay around $10K lower per year than my minimum, which was about $25K pa less than what I earned in my previous job. My minimum was a level that Madam2Bar and I worked out we could live relatively comfortably on with a few sacrifices.

Good news is that I also had a prelim interview at an agency for another position which looks good.

I'm not sure about other industries, but job ads from agencies for accounting related positions tend to be light on specifics - especially about the company. I was, however, able to use my l33t interweb skillz and the googlegod came up with what turned out to be the correct company.

So midway through the interview I was able to drop some info regarding the company, it's set up, history etc etc. And it turns out that I'd worked for a company that was in a related industry.

Sacrificing a good actual opportunity for a potentially great but not certain opportunity is hard, though.
Posted by 2BarRiff at 12:19 am No comments:

I still hate looking for work

Unemployed = having no job and looking for work.

Until now I've never been 'unemployed' so I don't feel too qualified to comment on being unemployed.

I can, however, talk with much experience about looking for work while employed (or, in my case, on 'self funded long service leave').

And the worst part is, for me, having an offer and second guessing on whether to take this job or wait a while for something better that may or may not come about.

The second worst thing about looking for work is having nothing to look at.

The thirst worst thing is tossing up whether to take a job that is around $25-30K p.a. less than the previous job.
Posted by 2BarRiff at 8:59 pm No comments:

I hate looking for work.

Probably the worst part of looking for work occurs at what should be the best time: A job is offered and I need to decide to take it or not.

This is when the second guessing occurs. What if something better is just around the corner? Should I hang out for more money? Does this job have an exit strategy in case it all turns pear shaped?

The job I'm looking at is is in an industry that I would LURVE to work in. But it is at around $25K a year less than I was earning, and no car. Sacrificing the $$ for personal satisfaction is all well and good, it's just the other 3 humans in the house that I also need to think about. We're risking music lessons, ballet, sports, movies, luxuries etc. just so I can hang with the kewl people.

The second guessing is killing me.
Posted by 2BarRiff at 9:12 am 4 comments:

I could get used to unemployment.
Posted by 2BarRiff at 3:00 pm No comments:

In his best Bill & Ted voice

So I thought to myself that it's time to check on the blog and maybe tend to a few weeds. After all, it's been a couple of weeks since I posted anything.

I think 4 months of non-blogging is some kind of anti-internet crime. I admit, however, to being internet-slack. Lotsa work, work, work, appendicitis scare for the Princess, other assorted bric-a-brac (redundancy alert!!!) of stuff. And the only internet-y stuff has been passive at best.

Except for fighting Madame2Bar off the computer owing to her Facebook related Tetris & Bejeweled addictions. Sigh.

Anyway, I think I'll be posting some more in future. Well, after the week in Bali starting tomorrow!!! (Totally NOT funded by any fiscal stimulus payments thank you very not Mr Rudd).

Then I'll be finding out what the world of the unemployed looks like, as Mr 2BarRiff and the tyrants at GFoC have reached agreement that our lives would be better without each other. They get to keep the car, laptop, mobile, fuel card, unfinished work (ho ho ho) and I get to keep the remnants of the sanity that I pulled out of my depression in a totally Arthur/Excalibur way, but with better imagery than I can summon right now.

No fear, I'll have another beer.

I think my average for New Year's resolutions is about 100% over the last two years. I have gotten better, and I have eaten (and experienced things) more slowly.

This year I think I'd like to work on my mission more. To try and draw my disparate hobbies and interests into something concrete. To pull my random stuff together into a thing. The lack of ever having a sense of a fulfilling mission has been a determining factor in my depression.

Over-arching all of that is a desire to simplify. To not waste time so much on new stuff but focus on what I've started but haven't finished. For example, the desire to buy and learn the saxophone is currently percolating through my brain, but I have a relatively new and difficult instrument that I just haven't gotten around to mastering yet.

I also want to get back to writing, so I'm formulating a series on depression as well as toying with the idea of running a separate blog (under my own name) on my progress with the other instrument.

A new thing for this year is to start by listing what I'm grateful for over the last year (in no particular order):
* Employment. Still continuing though there have been a few moments. The money is good, benefits are ok, power is almost non-existent but I'm working on it.
* Depression. I'm still fighting it, but there are more victories than defeats
* Family. My children are a never ending source of amusement, entertainment, wonder and fear. All the things life should be made up of, I guess.
* Madame2Bar. I still can't quite believe that she's mine, and I'm grateful for every day with her. Plus she can cook. And it's our 10 year wedding anniversary and 13 year dating anniversary this year. Which is, respectively, 10 years and 12.75 years longer than I ever though I would manage.
* God. I haven't felt close this last year, but I know that I am. I see God working around me every now and then, and it's been these little miracles that have helped me keep my faith.
* Music. I love music. It's something I'm more attuned with than I ever realised. This year has seen me focus a little more on the why rather than the doing. So when I started playing in the new church, it was actually fun again (plus I don't have to lead or sing).

What aren't I grateful for?
* GFoc and the tyrants I work for. While they seem to set new standards in assholery, it's been a positive stress, and my hair looks kind of cool now that it's over half grey.
* The demise of OneBarRiff. Dying sucks, no doubt about it. My advice is to avoid it where possible.
* Friendships. Aside from Madame2Bar, I still have a rather empty dance card when it comes to friendships. I, of course, think I am wonderful but it seems that I can't quite convince the rest of the world of this truth.
Posted by 2BarRiff at 10:02 pm 2 comments:

Really Mindblowing.
Posted by 2BarRiff at 10:08 pm No comments:

Us, your humble authors

<- That button, right there

Both in our 30s struggling through things like marriage, parenting, budgets, single income, depression, home ownership and being too damn sexy for our own good.

The blog title comes from the joint realisation that our children will succeed in this world because they are cute, not smart.

And we're only half joking.